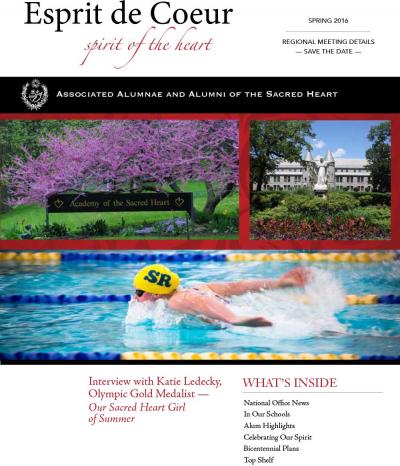 When Jane Musabeyezu and Micaela Kelly English met at Barat College, little did they know what an impact they would have on each other’s lives. It was 1998 and Jane had recently moved to the U.S. from Rwanda.

“We took some classes together and ended up in a sociology study group,” recalls Jane. “Barat is a tiny school, so everybody knows everybody. For four years, it was my home.”

While Jane had escaped the horrors of the genocide in Rwanda, she lost her father along with “tons of extended family members, friends and neighbors.” She says that it was so raw when she began at Barat that she never talked much about it. Micaela was one of a few friends who knew her story.

“Jane is such hero,” shares Micaela. “She saved lives in Rwanda,” referring to Jane and her mother helping children get to the French mission there. “They couldn’t take all of us, so Mom and I let them take three of our neighbor’s kids, instead of us,” explains Jane.

It was serendipitous that Micaela was at Barat College when Jane arrived. Micaela had attended Barat College in the late ’60s, but didn’t finish. Years later at a friend’s dinner party, she met Lucy Morros, president of Barat, who encouraged her to return and complete her degree. Then she met Jane and they became good friends. “She was fun. She seemed strong,” says Micaela. “We were helping each other study. I liked her right away.”

Micaela’s family lived near Barat College and Jane (She adapted her name from Janviere when she arrived in the U.S., and her last name translates as “ask Jesus.”) spent time with them. “She took me under her wing,” Jane says. “She became like a mother.”

Micaela graduated in 2001 and when Jane graduated the following year with a degree in sociology, Micaela hosted her graduation party. Since Jane had no family here, it meant the world to her. In addition, Micaela gave her an incredible graduation gift – paying a year’s rent on an apartment that she also helped furnish for Jane. With another Barat College friend and alumna Patsy Reiss, RSCJ helping secure a job as a house parent at Woodlands Academy, Jane was on her way.

Micaela shrugs off the enormous generosity of her gift. “She is a wonderful girl and I wanted to celebrate her graduation. I was very proud of her,” she explains.

“I was pretty sure she didn’t have definite plans and I wanted to find an apartment for her. I wanted to give her a good start.”

“She did so much for me,” Jane glows. “How many people would do this? She is so modest. I would be back in Rwanda.” Instead, Jane has been able to bring three family members to the U.S. to attend college. Her sister, Chantal, also attended Barat College. Eventually, Micaela moved to New York and they lost touch for some years. Jane was living in Chicago and happened to see a house for sale in the newspaper. She recognized it as Micaela’s house and wrote to the address in the ad, hoping to track down her friend. Micaela’s son, who was living in the house, opened the letter and immediately put them in touch. Jane says she turned to her husband (Barat College classmate Ryan Ennis) and exclaimed, “Honey, I found her!” Micaela called and the two spent hours catching up.

“We reconnected,” says Micaela. “It was unbelievable.” Now they communicate regularly and are working on getting together. Jane and Ryan recently moved to Austin, Texas with their three children but are hoping to visit Micaela in New York.

“It was mind blowing knowing what she had been through,” says Micaela. “Her goal was to bring her family members over to the U.S., and I was in the right place at the right time. I felt very fortunate to have met her. I feel lucky and blessed to know her as a person.”

With tears in her voice, Jane says, “Talk about friendship!”