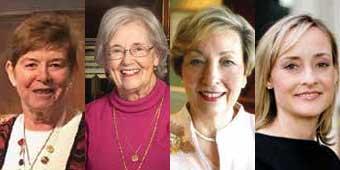 Patricia Dalferes Martin, “Patsy of the joyful heart,” as she’s known
to one friend, ministers.She has taught new parents the meaning of
their infants’  baptisms, taken care that elder members of her spiritual
communities are accommodated, visited with her former teachers
and retired Religious, housed a homeless refugee family, guided the young and underprivileged into the beauty of music, shown Girl Scouts the glories
of God’s outdoors, supported empowerment of the abandoned in the U.S. and across the world and blessed the efforts of the Religious of the Sacred
Heart constantly for seven decades. Hand in glove with her practice of ministry, Patsy has a long and accomplished relationship with the women’s
community known as Theresians, a group that seeks to empower women to be present to the world in ministry. Patsy served as program leader and as president of Day 1, her Theresian small community in Houston, and headed the movement’s national leadership team. She also has been an advocate
for the Cenacle Retreat House, a women’s retreat center.

Patricia graduated from the University of Louisiana at Lafayette, married her beloved Woods, and made her home in Houston, where she joined the efforts of other Sacred Heart alumnae to found Duchesne Academy of the Sacred Heart. As a lay person with particular appreciation of the Sacred Heart charism, she was an invited delegate to the Provincial Assembly in 2001, attended the 2013 Summer Forum on essayist and poet Janet Erskine Stuart, RSCJ, and traveled to Rome to mark the  beatification of Rose Philippine Duchesne.

The breadth of Pamela Moore Snyder’s heartfelt  involvement in service includes her work with San Diego’s Kraemer Foundation, the St. Madeleine Sophie Center, a facility serving adults with developmental disabilities, and the Japanese Culture Club of Arizona, a nonprofit organization which promotes goodwill through  cultural exchange between Japan and Arizona.  She is an active member of the Phoenix Chapter of Maryknoll Associates, a group devoted to  mission and social justice. She has served as a University of San Diego Alumni Board member, class correspondent for her class and, in her parish for several years, as an RCIA teacher, Girl Scout leader, swim teacher and parish liturgy coordinator. Pam is also in her second term on the board of the Vatican Observatory Foundation, a Tucson philanthropy involved with the Vatican Advanced Technology Telescope, or VATT, at the University of Arizona’s Steward Observatory. Subsequently, she has been designated to serve as a Vatican Observatory Ambassador. Pam served twice as president of the Arizona AASH and as recording secretary for the AASH National Board. She designed a medal memorializing St. Philippine Duchesne’s canonization and organized the effort to market it on behalf of AASH. Pam served as AMASC President from 2010 to 2014 and presently serves as AASH and AMASC Representative for the Arizona AASH. 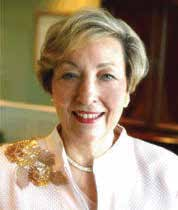 In the late 60s, Virginia Kratage Antakli married the love of her life, Nick Antakli, and moved to Beirut in time to endure three wars.  She nursed  the wounded in her home and helped found the Christian Council for Peace and Justice in the Middle East to teach archdiocesan school children the Christian aspects of problems in the Middle East. From her time at Manhattanville to the present, Virginia has given her spiritual life the highest priority. She encourages her friends’ participation with her in the Children of Mary Sodality, lectors during mass at Bloomfield Hills and makes it a point to attend the All-School Liturgies.

Virginia served as a Bloomfield Hills room mother, taught at the school and served as a member of the Board of Trustees. She chaired a capital campaign, raising more than $3 million and still writes to graduating students as part of the school’s Prize Day tradition.

Virginia received her MA from the University of Detroit Mercy in 1963. Because of her enriching experiences as a Sacred Heart student, Virginia not only enrolled her daughters and granddaughters in school at Bloomfield Hills, but also continues to be a strong ambassador for Sacred Heart education. The breadth and depth of her influence are the hallmarks of a strong representative of all things Sacred Heart in the global community. 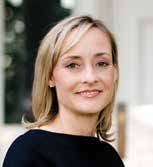 Catherine Ronan Karrels became the founding  president and principal of San Francisco’s De Marillac Academy in 2001, drawing students from one of the nation’s poorest neighborhoods. She helped the school grow from the original class of 19 sixth graders to a student body of 119 in grades four through eight. While attending Boston College, Catherine developed an interest in teaching that led her to the Jesuit Volunteer Corp for a year of teaching  disadvantaged students. San Francisco State University followed, for a Masters Degree in Education. After several years teaching in a Catholic school, Catherine accepted the challenge of starting De Marillac Academy. She finally returned to Stone Ridge as its first lay Head of School. Catherine has worked with the Network of Sacred Heart Schools in restructuring the Conference of Sacred Heart Education. Her passion for excellence in education, social justice, spirituality and community have been lauded at every step of her career. Catherine has been awarded the Boston College Alumni Association Award for Excellence in Education, the Saint Francis Hospital Community Hero Award, the District of San Francisco Distinguished Lasallian Educator Award and the John Carroll Society Medal for her work “play[ing] a critical role in building the Church.”

Sacred Heart alums are renowned for their accomplishments, achievements, and contributions. They are active within their association, at their schools, in their communities, with their families, and many other venues. AASH, each biennium, salutes four of these alums with a Cor Unum Award.